AT&T (T) seems like another good defensive stock with a strong buy case right now. I note the Dallas-based telecom giant has fallen 25% since the start of the month. Of course, most stocks have suffered a similar fate. Indeed many are down much more than that. Now, things may well get pretty bad out there. I saw that over three million Americans filed for unemployment last week, which is almost incomprehensible.

On that note, it is likely that AT&T will also take some kind of hit. Its WarnerMedia segment seems the most obvious place for disruption. This was a circa $9,700m EBITDA business last year – broken down into Turner ($5,380m), Home Box Office ($2,435m) and Warner Bros. ($2,540m). TV production over at Warner Bros. has been suspended, while its film releases have been pushed back now that movie theaters are no-go zones.

The suspension of major sports leagues will also hit broadcasters, including Turner Sports, for obvious reasons. Advertising was a $4,500m revenue business for Turner last year, with live sports being a big draw for ad-dollars. That said, certain other Turner division assets – news station CNN and kids’ channel Cartoon Network being two examples – are doing great. Folks (and their kids) being stuck at home is giving a boost to the company’s non-sports linear-TV assets.

Anyway, it appears to me that AT&T’s core business will hold up better than most. To provide some color to that statement let’s take a look at last year’s finances. All-in-all the company generated around $60,000m in annual EBITDA. Just over $50,000m of that came from its Communications segment. This encompasses everything from selling cell phone contracts (a circa $30,000m EBITDA business last year), to pay-TV, broadband internet and advanced services for corporate customers.

There will no doubt be some volatility here too. I’d imagine we could well see an acceleration in folks cancelling expensive pay-TV subscriptions, for example. The company has already lost around five million video subscribers over the last three years and I expect that to continue. That said, and taken as a whole, I’d wager that these utility-like segments will hold up quite well.

The debt load has been the main focus here for some time now. Of course, entering a period of unprecedented uncertainty with around $150,000m in net debt is not ideal. A quick look at the balance sheet shows around $11,800m maturing in 2020. Before the virus, AT&T expected to generate around $28,000m in free cash flow this year. The cash dividend consumes around $15,000m, so let’s put excess cash generation at around the $13,000m per annum mark in ‘ordinary’ circumstances. 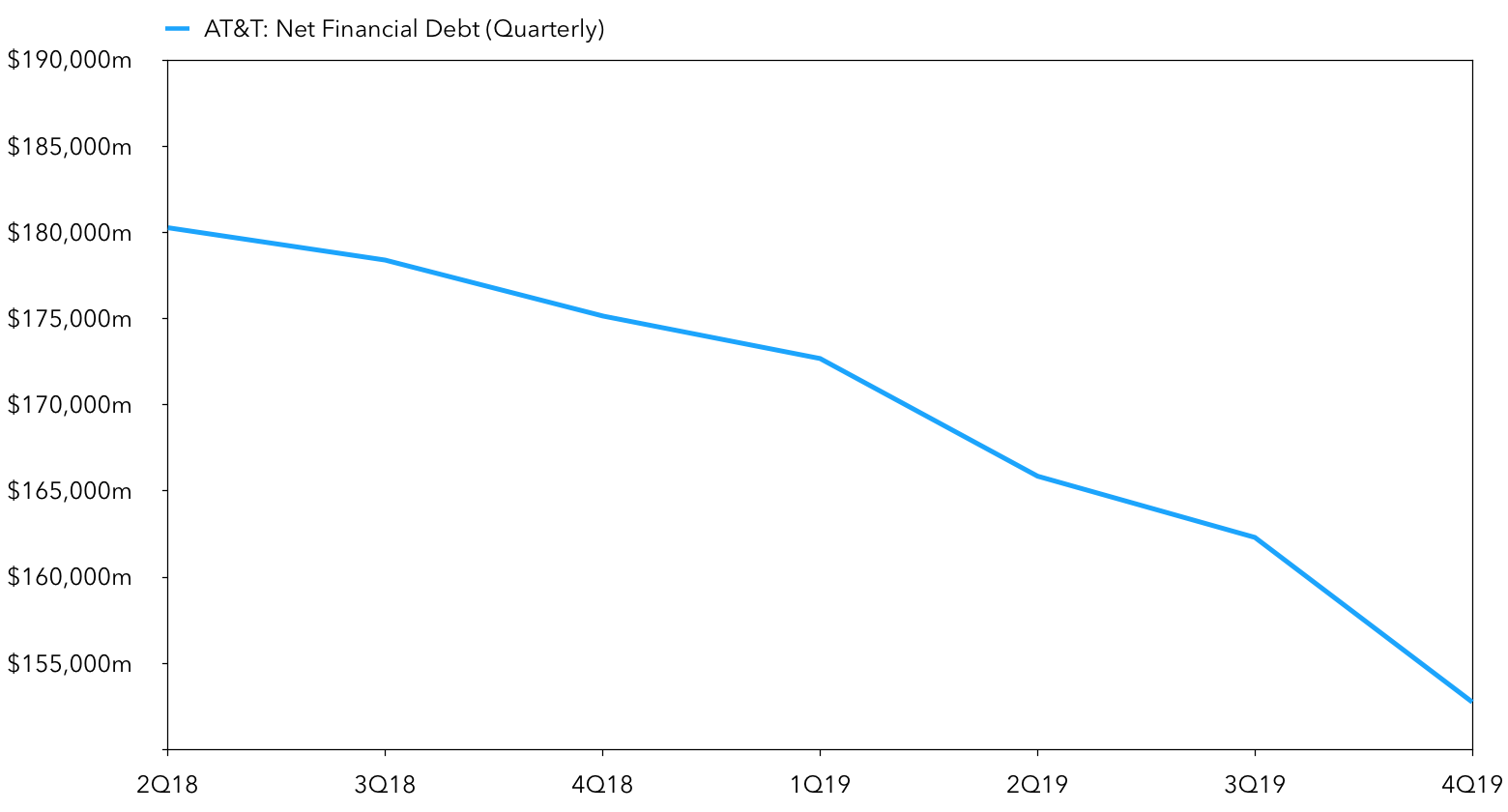 On the face of it, those figures look rather tight. Especially as free cash flow will probably take a hit over the next few months. However, this doesn’t strike me as such a big deal. For one, the company could easily refinance its short-term debt. I mean interest rates are on the floor and it wouldn’t have a problem raising cash. Secondly, the company has untapped credit facilities plus around $12,000m in cash on its balance sheet. At circa 2.5x EBITDA, the debt load looks manageable to me.

We are back into ultra-cheap territory here. The virus will wreak short-term havoc, but just look ahead to the company’s 2022 targets. It reckons it can generate around $30,000m in annual free cash flow at the low end, with adjusted earnings per share coming in at around the $4.50 mark.

These targets are not particularly aggressive. Heck, it can realize a lot of that just through debt reduction. The company sees net debt around $20,000m lower by the end of 2022 versus current levels. Quick math suggests at least $1,000m in pre-tax free cash flow would be generated simply via saved interest expense. Share buybacks would do the rest. 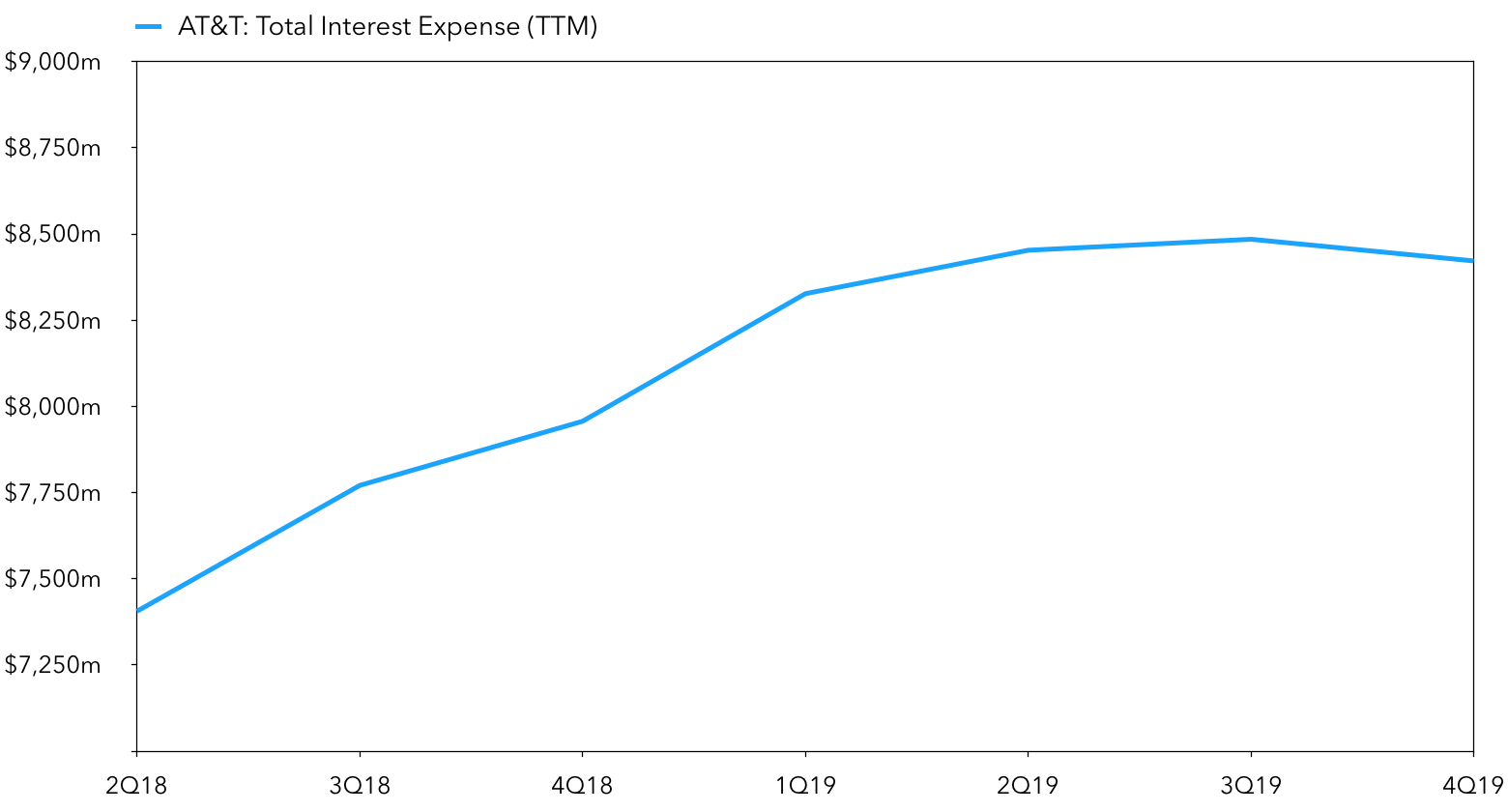 AT&T stock closed the week under the $30 mark. It trades at around 8.5x last year’s profit. The $2.08 annualized dividend currently yields around 7% as things stand. Let’s assume it carries on with its annual penny per share raise to the quarterly dividend. This equates to a payout of $2.16 per share on an annualized basis by 2022. Considering this would cost the company just $560m more in cash each year (absent stock buybacks), it strikes me as a pretty conservative scenario.

Here’s the thing, at a 5% dividend yield we would be looking at a share price in excess of $43. In addition, shareholders will realistically collect another $4.20 or so per share by way of cash dividends over the next two years. All-in-all, I fail to see how folks won’t be making 60%-plus returns here over that timeframe. You get to collect a 7% cash dividend in the meantime too. The last time AT&T stock was down here, it rallied 30% in six months. For a mega-cap domestic stock that will weather the storm better than most this strikes me as a good deal.

You should teach how to make these estimates…