There’s one financial myth I’ve come across a few times that is often aimed at younger folks. The advice given is to avoid buying large-caps when you start out investing and to target growth stocks instead. Presumably, the logic behind this is that high earnings growth will do the heavy lifting in terms of wealth creation. After that, well, you can then transition to stodgy dividend stocks in old age.

In order to bust this myth wide open let’s take a look at some stock market history. In front of me is a table showing the fifty largest stocks on December 31st, 1950. (To clarify: by largest I’m referring exclusively to stock market value). Any guesses for the number one largest stock? It’s that stodgy blue chip in the title: AT&T (T).

As students of stock market history will know, AT&T has had a very colorful corporate life over the years. It has been a monopoly, broken up by the United States Justice Department, and then partially put back together again during the past six decades. The data I have suggests it has generated shareholder returns equal to around 10% per annum on average over that time. Not too shabby for the stodgiest name in the world back in 1950.

Now, I have no doubt that many folks, particularly younger investors, thumb their noses at AT&T stock. After all, earnings and dividend growth has been pretty anaemic in recent years. Leave a stodgy name like this to the older folks who like fat dividends.

Ignore all of that. AT&T stock is a good example of what you can do with with a big name in a mature industry. For instance, by 1957 – when it was still the largest name on the market – its market-cap was $110,000m in today’s dollars. Did that prevent it absolutely annihilating inflation and generating huge amounts of wealth over the next sixty years? No. 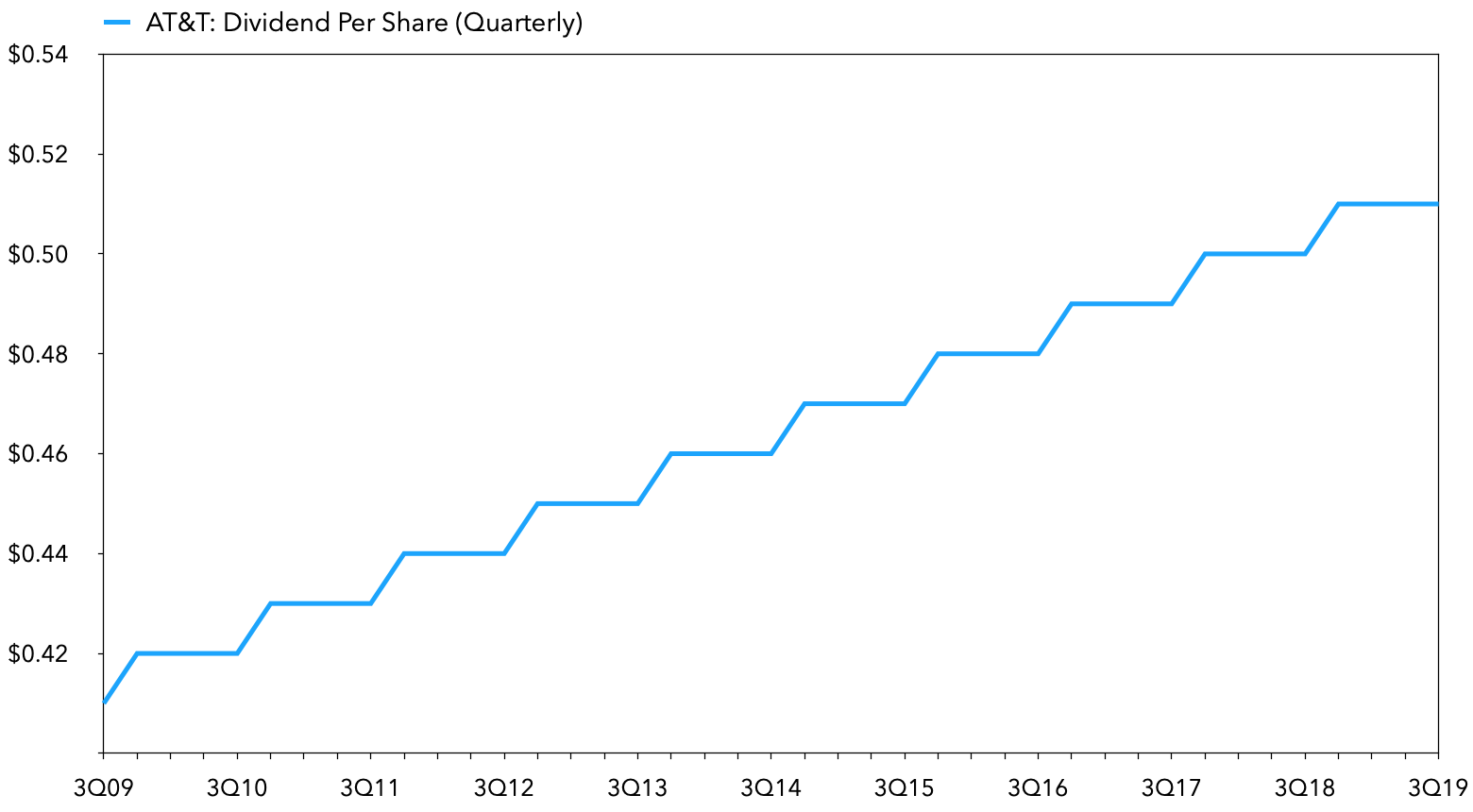 Though there are actually far better examples out there – Procter & Gamble, Royal Dutch Shell and Exxon Mobil spring to mind – I’ve chosen AT&T for one important reason. Its growth outlook is poor and has been for quite some time. That fact hasn’t prevented AT&T stock from possessing a great investment case over the past eighteen months or so.

The last time I covered it, its shares were trading around the $30 mark and throwing off $2 per share in annual dividend cash. Not only that, but the latter figure clocked in comfortably below net profit (somewhere in the $3.50 per share range). Who needs growth when you can lock in a 6.5% dividend yield and an 11.65% earnings yield?

This leads me onto the current investment case. As it stands, the shares are trading for around $38.50 apiece – clearly a less attractive proposition than I when last covered the stock in November of last year. However, with an interest rate cut occurring since then I guess it’s no surprise that solid dividend stocks have received a boost. Throw in the $1.53 paid out in dividend cash, and the stock has returned over 35% so far in 2019.

That aside, much of the thesis from last year’s article remains intact. AT&T’s core business is pretty static. Some areas – e.g. DirecTV, its satellite TV business – are not doing so good. Its pay-TV services continue to bleed subscribers, with losses topping three quarters of a million – or 3.5% of its base in 2Q19. On the plus side, the cell phone business is solid. Subscriber growth is stable to positive, as is revenue and profit. WarnerMedia, whose assets include the likes of HBO, Cartoon Network, CNN, Turner Sports and the Warner Bros. film studio, is also posting good numbers. Operating profit in the segment saw double digit growth in the last quarter – the best performing segment in AT&T’s stable. 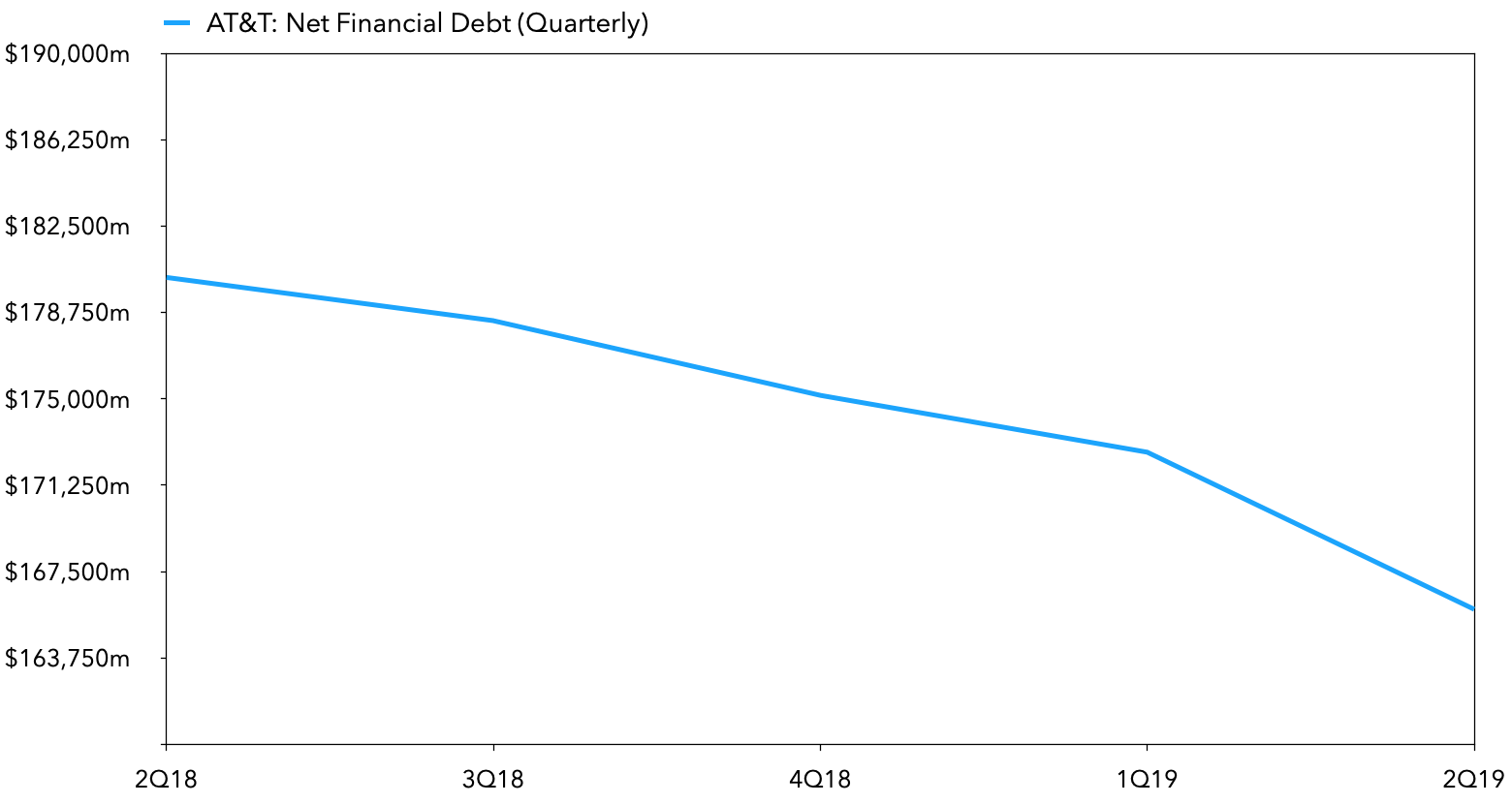 Anyway, this leads us to find inorganic measures for overall profit growth. One of the big bright spots at AT&T right now is its cash flow situation. It is posting huge figures in terms of its annual post-dividend surplus. This year, the number should clock in at around $12,000m – enough to really attack the 2018 year-end net debt position of $170,000m. The associated decrease in interest expense is probably worth a couple of points to net profit growth on its own.

Once debt is returned to more comfortable levels, then stock buybacks can fulfill a similar role. If AT&T could put, say, $7,000m to work every year reducing its share count, what would the effect be? At today’s stock price it would be worth two or three percentage points to the per-share profit number. That may not sound particularly inspiring on its own, but throw in a 5.5% dividend and you’ll come out somewhere around its long-term average in terms of total returns. The stock may not be as attractive as it was this time last year, but I’d wager AT&T is still reasonably priced enough to dispel the myth that low-growth stocks can’t perform in the long run.

The Incredible Consistency Of PepsiCo