AT&T: Due A Rerate

Barring a last minute catastrophe AT&T (T) looks set to post a strong 2019. As I type, shares in the Dallas-based telecom giant are up around 40% this year (inclusive of dividend cash) and comfortably ahead of relevant blue chip benchmarks such as the S&P 500. Pretty good, right? Taken in isolation I guess the answer to that question is yes. Shift to a slightly longer-term perspective and the answer is a bit less clear.

Inclusive of reinvested dividend cash I have total returns at around 8.6% per annum over the past half decade. Or put another way, most of the wealth creation that took place over the past five years occurred very recently. (It says a lot about how beaten up the stock was that a 40% gain in twelve months might not represent meaningful long-term progress depending on your exact starting point).

So what is going on here? Two things standout to me in particular. First, AT&T has diluted its shareholders significantly in the intervening period. At the end of 2014 the company had around 5,200m shares outstanding. As it stood at the end of 3Q19 that figure had ballooned to 7,300m. Second, AT&T has taken on a lot more debt over the same time frame. By my count the balance sheet now sports around $85,000m in additional net debt compared to this point five years ago.

Of course both points stem from the big ticket acquisitions of pay-TV company DirecTV and media giant Time Warner. Indeed, the ongoing hangover associated with those deals was partly why activist investors Elliott Management recently took a three billion dollar stake here with a view to shaking things up.

Now, the thing with hangovers is that they tend to incapacitate you until they finally wear off. In AT&T’s case, that takes the form of being committed entirely to debt reduction. I think the company has somewhere in the vicinity of $60,000m due over the next five years. Post-dividend, the company generates somewhere in the region of $12,000m per year in excess cash. Back of the envelope math suggests AT&T is essentially tied up for the foreseeable future.

Of course the company can, and probably will, end up refinancing a chunk of that debt. However, given its current credit rating (with leverage at around 2.6x EBITDA) there doesn’t appear much room for discussion. Right now debt reduction is mandatory rather than an optional capital allocation decision from management.

On that note we have both good news and bad news. The bad news is that debt reduction in itself is an inherently low returning activity. To illustrate that point consider the interest bill on its $160,000m worth of net financial debt. As it stands, it costs the company around 4.4%, or circa $7,000m per year. (The $8,400m bill shown on the income statement includes other interest expenses not linked to financial debt). 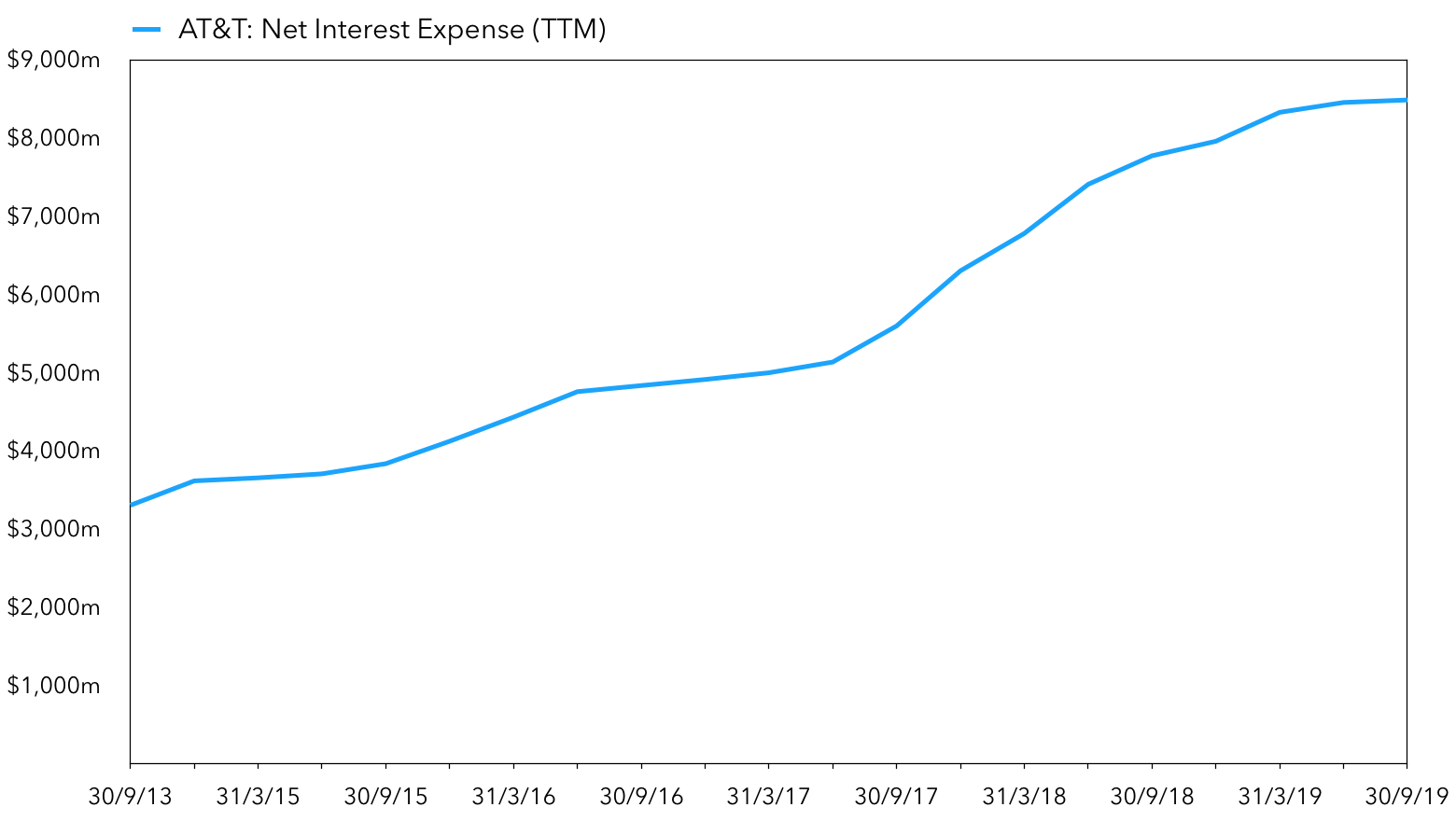 Based on current cash generation, plus future growth from saved interest payments, it would take AT&T around thirteen years to completely wipe out its debt load. (I’m not saying the company should do this, it is just to illustrate a point). Run the numbers on what an extra $7,000m in pre-tax income looks like and you should get a figure in the region of 2.5% per annum to AT&T’s bottom line.

Compare that to the impact of stock buybacks. At the current share price AT&T could retire around 315m shares with that $12,000m annual post-dividend cash flow figure. I make that equivalent to a circa 5% boost to the bottom line in ‘per-share’ terms.

On the flip side, the good news is probably twofold at this point. Firstly, AT&T stock is still reasonably valued to the extent that debt reduction can generate high single-digit returns. (As it stands the stock could generate returns of 8% per annum consisting of a 5.2% current dividend yield and 2.5% annual growth from saved interest payments, all other things being equal). Indeed, this is probably why the stock is up 40% this year. Back in January you could lock in 10% annual returns simply from the dividend and debt reduction.

Secondly, as debt reduction gathers pace I would expect the share price to follow suit. Eventually, the company will be in position to throw north of $14,000m per annum at stock buybacks. As mentioned above, the net result would be a circa 5% boost to per-share profit metrics (all other things being equal).

Or put another way, at the current share price AT&T could be in position to self fund dividend growth in the 5% per year region on top of a starting 5.2% yield. (Bear in mind the company also expects earnings growth from a mixture of cost reductions, organic growth and synergies from the Time Warner deal). To me that looks pretty attractive. The only significant assumption you have to make is that the profit engine from the day-to-day activities of selling cell phone plans, pay-TV and media content from WarnerMedia remains stable.