One of the first articles I penned last year set out the value case for Apple (AAPL) stock (at the time the shares were changing hands for something like $153 each). Since then, I note that the shares have returned around $156 apiece in share price appreciation, plus a couple of bucks or so in cash dividends. To all the folks out there who made an investment in Apple stock at the start of last year: you are currently up just over 100%.

When analysing that performance a couple of things stick out. Firstly, Apple’s business hasn’t actually changed all that much over the past year (and when I say that I’m speaking purely in terms of the headline numbers). I mean back in its fiscal 2018 (Apple’s year ends in September remember) the company reported total revenue of around $265,000m from the sale of iPhones, Macs, iPads and associated services (e.g. its cut of App Store sales, iTunes movie downloads and so on). The insane profit margins that Apple generates on that activity meant it managed to retain over 20% of that revenue figure as post-tax net profit.

Now fast forward one year. Over its fiscal 2019, Apple actually collected a few billion dollars less in revenue than it did over the course of 2018. Profit margins remained insanely high, which translated into slightly lower net profit in 2019 versus 2018. Despite the small fall in revenue and profit, Apple stock basically doubled in price over that period.

You probably noticed I omitted the per-share profit figures when comparing 2019 to 2018. The reason I did this is because the second thing that stands out is the almost insane rate of share repurchases that have gone on here. I mean the numbers are so vast that they are almost incomprehensible. Since the start of its fiscal 2014 the Cupertino-based giant has spent a cumulative total of almost $170,000m on stock buybacks. In exchange for that huge outlay, it has repurchased just over 30% of the 6,300m split-adjusted shares it had outstanding at the start of that period. That is massive. 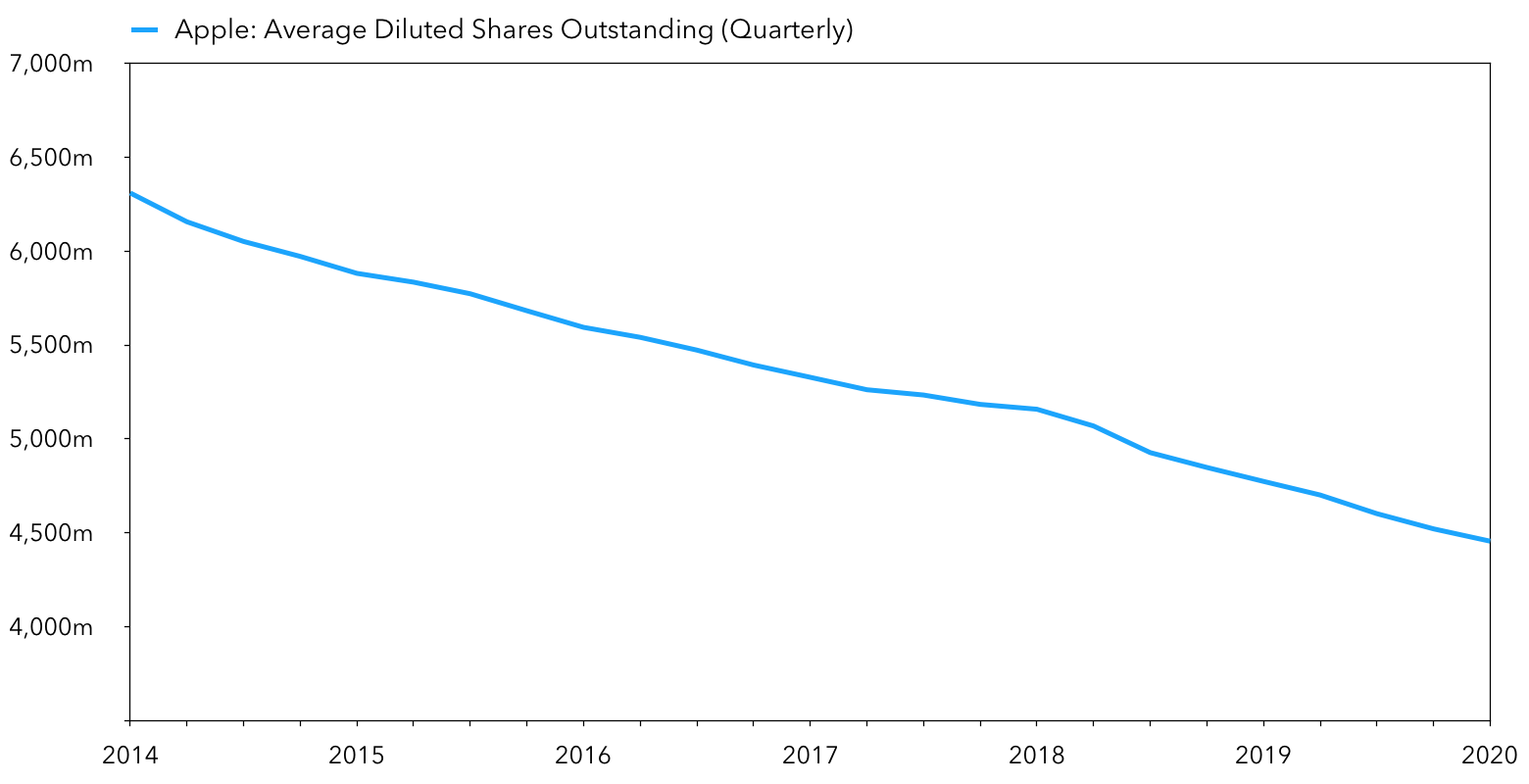 The really impressing thing is that Apple hasn’t even had to degrade its balance sheet to pull this off. Net of cash and short-term investments, I have debt at just under two billion dollars right now. As far as Apple’s earnings power goes, that’s the equivalent of around ten days’ worth of net profit. In theory it could even pay down its $110,000m gross debt pile within a couple of years if it wanted. That’s how much money the company makes.

So how has Apple managed to pull this off? The short version is that Apple stock has been very cheap at times over the past ten years. Heck it was trading at an 8% earnings yield just last January. If I had to explain why, I’d guess it is because the revenue and profit stream is traditionally more lumpy at Apple compared to service-oriented tech giants such as Alphabet, Microsoft and Facebook. In years that Apple released a new iPhone, revenue and profit would spike. In the off-years it would either not increase all that much, or it would even fall back a little.

At close of play on Friday Apple stock closed at $309.50 per share, down 4.4% on the day amid a wider market rout. Wall Street analysts expect the company to make just under $14 per share in net profit over fiscal 2020. Back of the envelope math therefore puts the valuation at circa 22x earnings.

Although that’s obviously higher than the stock’s historical average, my view is that it still represents a decent longer-term deal. I say that for two reasons. First, Apple’s balance sheet is still fortress like. As I mentioned above net debt here is roughly zero. If you add up all of its cash and short-term investments, the total figure roughly equals the $109,000m debt pile.

Now, what this figure ignores is the company’s long-term investments. These are typically bonds that mature in two to five years, but in theory they could be longer dated. Anyway, despite progress in winding down its portfolio, Apple still has around $100,000m in long-term investments on its balance sheet. That makes the valuation a little cheaper than the headline P/E ratio suggests. 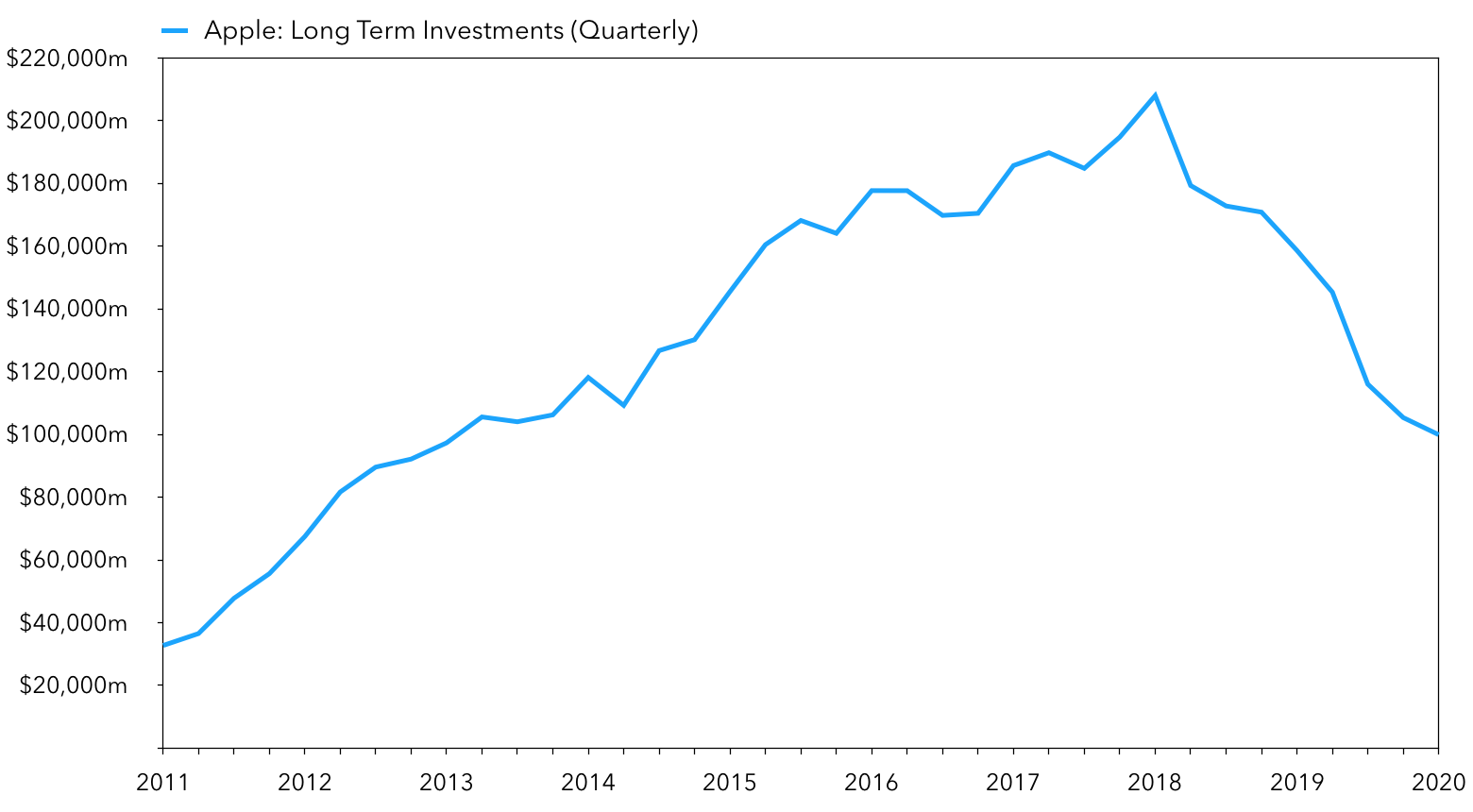 The second reason has to do with the company’s revenue and profit mix. Put simply, revenue from Services is growing like crazy. In 1Q20 it clocked in at $12,715m, up around 20% on 1Q19. This is a $50,000m-plus annual business we are talking about here. By 2025, that figure could realistically hit over $100,000m. Contrast that with sales in the Products segment. Apple sold around $79,000m worth of products in total in 1Q20, 70% of which from the sale of iPhones. That was around 8% higher than in 1Q19. Bear in mind that profit margins from services are also much higher than selling physical products.

On that basis, I don’t think that Apple stock is particularly expensive. It isn’t on sale like it was back in early-2019, but in the current environment it strikes me as reasonably valued. That said, and given how irrationally the market has often acted toward the stock, it would not surprise me to see further large swings in its valuation multiple.