Pick any measure of Apple’s (AAPL) profitability you want and it will point you toward one conclusion: the business is a licence to print money. The business of selling iPhones, Macs, iPads, Apple Watches and assorted services (e.g. Apple’s cut from App Store sales, TV shows downloaded on iTunes, and so on) has generated $330,000m worth of free cash flow for Apple over its last six financial years.

The figure is so astonishing that I had to triple check it. Remember this is cash left over solely to return directly to shareholders, pay off debt, buy other businesses or else just accumulate in bank accounts across the world until the company figures out what to do with it. (In reality Apple has plowed around $170,000m into longer-term investments like corporate bonds).

Despite the above there is a recurring annoyance that regularly crops up in Apple stock discussions: valuation. It has become an established fact that Apple stock regularly trades ‘cheap’. What do I mean by that? Well, let’s just compare Apple to some of its peers in the tech sector. Amazon, for example, currently sports an enterprise value to EBITDA ratio of around 30. Alphabet (the holding company that owns Google) sports an EV-to-EBITDA ratio of around 19. Microsoft’s clocks in at 15. Facebook stock, despite losing a quarter of its value over the past six months, still trades at an EV-to-EBITDA of 13. Apple, in contrast, sports a current EV-to-EBITDA value of just 9. 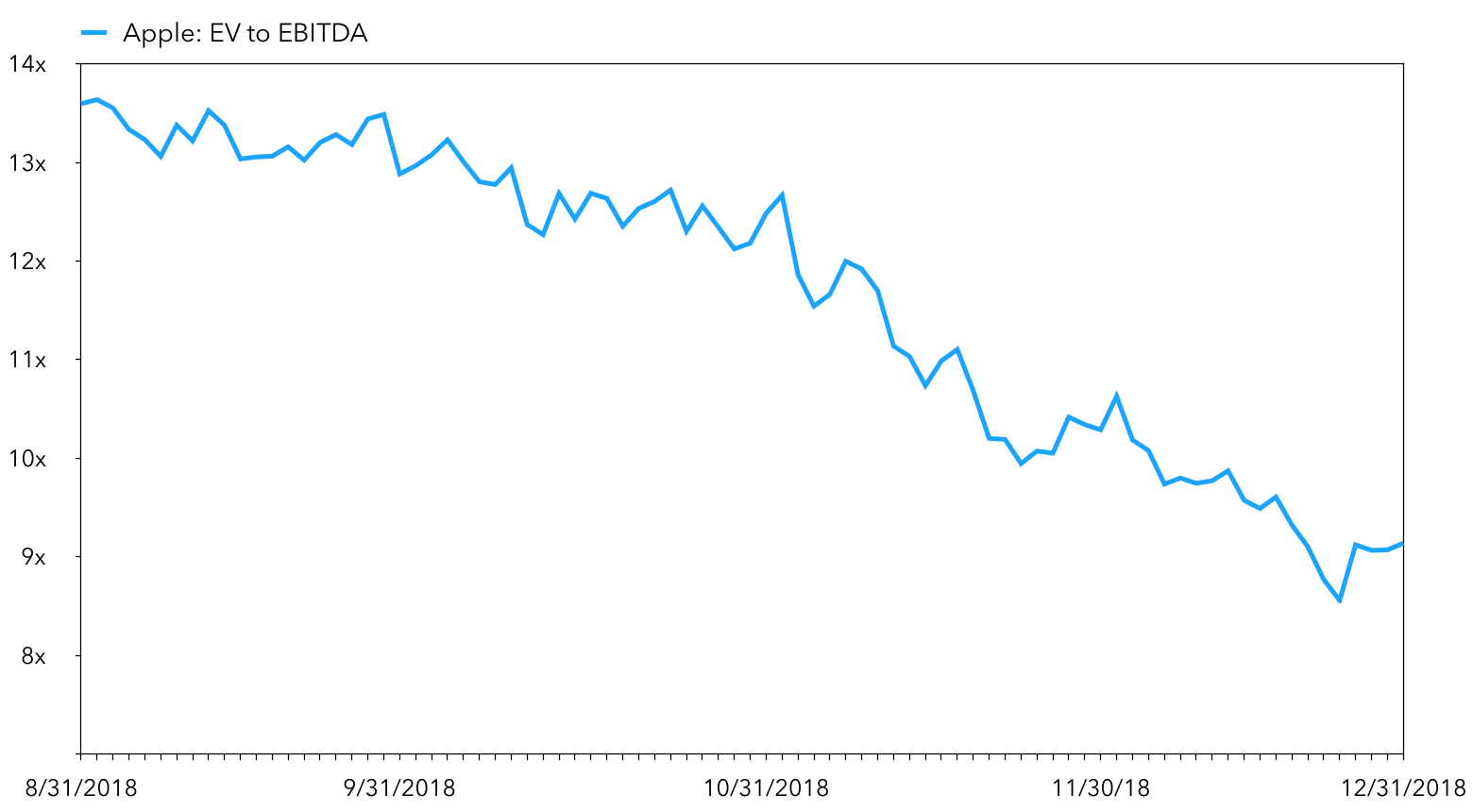 That huge difference ultimately boils down to one thing in my view: Apple tends to report lumpier earnings figures than most of the service based companies listed above. Perhaps the market simply doubts the longevity of Apple’s products/services versus other large tech companies. Either way it seems unreasonably cheap. I mean right now Apple trades at earnings yield of just over 8%. It has $235,000m worth of cash, cash equivalents, short-term investments and long-term investments sitting on its balance sheet versus $115,000m worth of total debt. It plans to return that difference directly to shareholders.

On that note it’s worth mentioning the share buyback program going on here. Back in 2013 Apple had a total of approximately 6,500m shares in existence. That figure currently stands at around 4,750m. (If you run through the math you will find it is the same as boosting per-share earnings by around 4.5% to 5% per year).

The total cash bill for eliminating 1,750m shares over that time frame? $235,000m. Cash dividends to shareholders took up a further $72,000m. We could therefore say that the total amount Apple spent on returning cash to shareholders was in the region of $305,000m to $310,000m. As large as that number appears, amazingly it is still less than the number I presented in the first paragraph: $330,000m. That was the total free cash flow generated by the company over the same period. 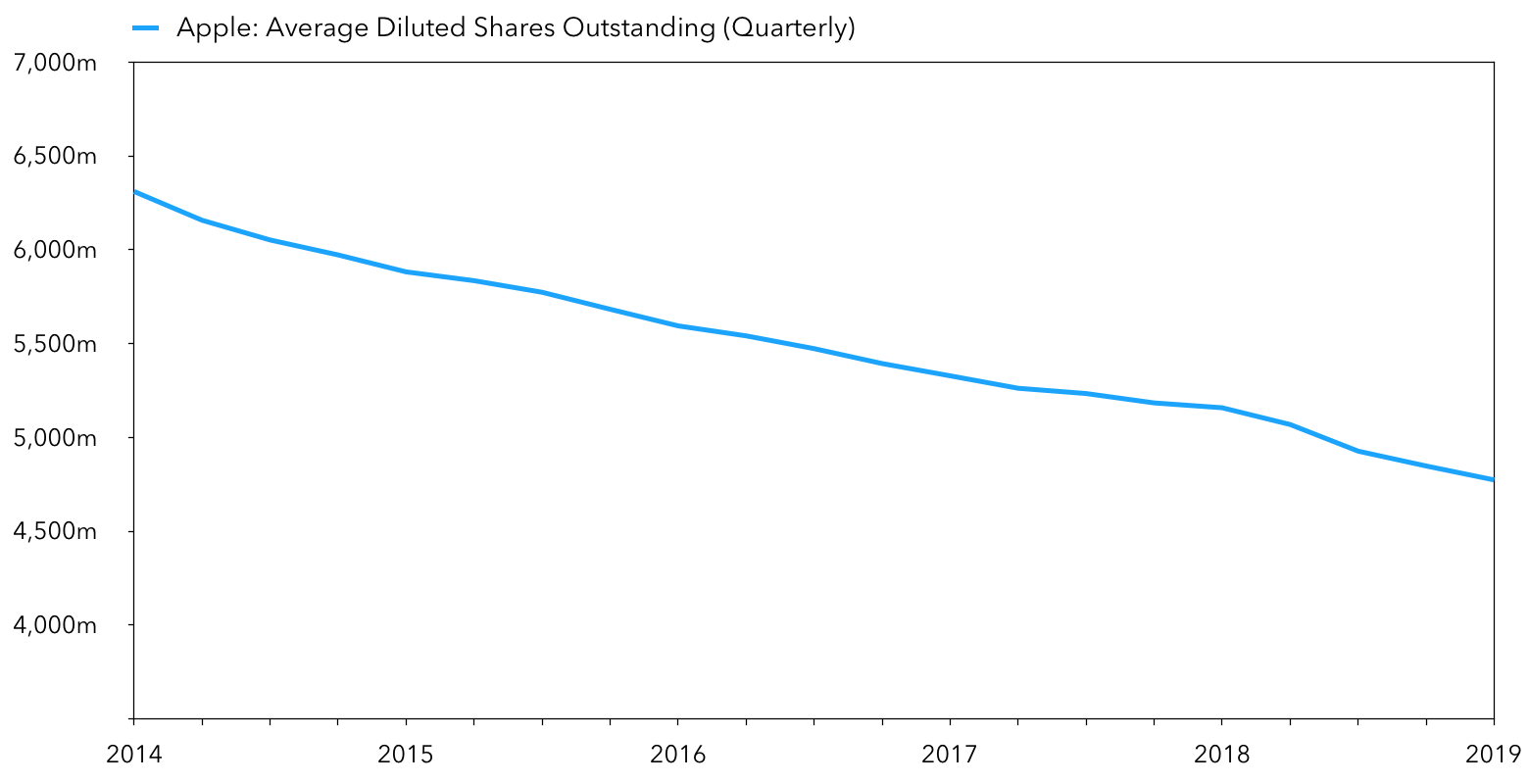 So what do those numbers mean for investors? In short it appears that Apple can probably return 50% of its current market value to shareholders over the next few years without breaking a sweat. That’s before taking into account any growth assumptions. It isn’t even including the $120,000m-plus balance sheet ‘surplus’ I mentioned above. Even if you are unsure about Apple’s long-term prospects (who is confident enough to make predictions regarding technology after all) there seems a good chance that the stock will deliver solid shorter-term returns.