I note that Anheuser-Busch (BUD) stock remains fairly cheap. The debt-laden beer giant has traded pretty flat over the past six weeks, which is when I last covered the stock. At the time, the Budweiser and Stella Artois owner had just inflicted its second dividend cut on shareholders in as many years. It has since released its 1Q20 financial numbers which, as expected, came in pretty messy. Volumes fell just over 9%, improving to a 3.6% drop excluding China. EBITDA clocked in at $3,949m, equal to a 13.7% drop on the equivalent period last year.

At the risk of stating the obvious, the current quarter will be much worse. The company estimated that volume declined by around 32% in April, largely due to the effects of lockdowns on its on-trade channel. It also had to deal with a full shutdown of operations in markets such as Mexico and South Africa, the result of which left it unable to brew and distribute beer. That kind of disruption would have been almost unthinkable at any point prior to the COVID-19 pandemic. Anyway, that’s the backdrop against which the stock has struggled. It is down around 40% year-to-date, badly underperforming the S&P 500.

The debt load has been the main concern here for some time. It struggled to deleverage to the extent some of us envisiged following the SABMiller deal a few years back. I recall a certain analyst note predicting leverage of circa 2.9x EBITDA by the end of FY19. The actual figure came in at around 4.5x EBITDA. Net debt stood at circa $95,500m at the end of last year. 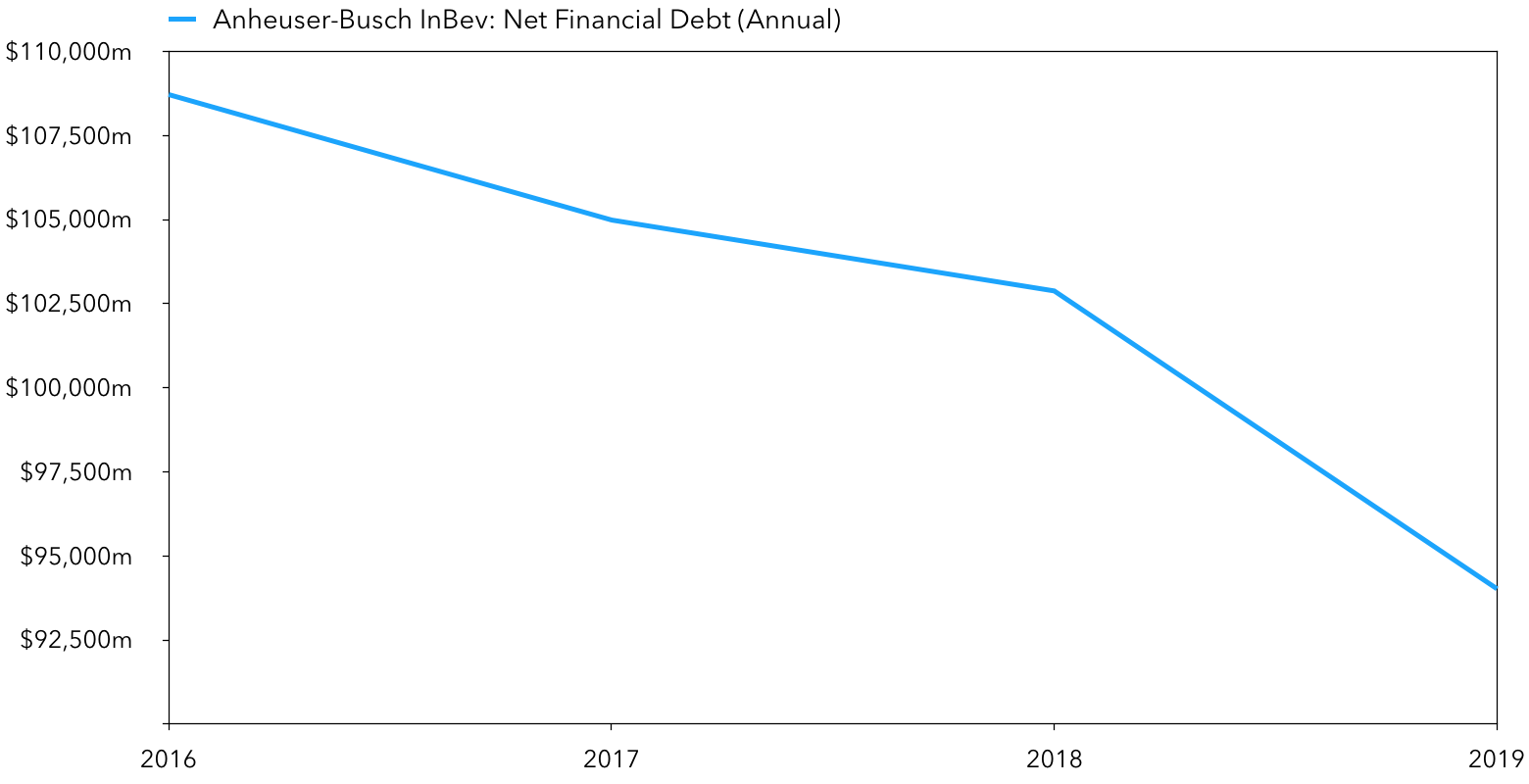 There has obviously been a lot of movement on that front since then. The company has made full use of its $9,000m revolving credit facility, and it has also raised circa $11,000m on the bond market. That’s on top of the $7,300m in cash it had at the end of FY19. It used part of the money to address near-term debt maturities.

As a result of the above, it looks as though the firm now only has around $5,000m worth of its long-term debt due through FY22. It also completed the $10,700m sale of its Australian subsidiary, Carlton & United Breweries, to Japanese firm Asahi yesterday. That should put it into a decent position regarding liquidity.

As mentioned in the opening paragraph, I think Anheuser-Busch stock is pretty cheap. We should obviously write this year off, but that’s fine so long as the firm gets through it okay. I’m more interested in the next few years or so.

On that note, management is still shooting for leverage in the 2x EBITDA range. Now, this is at least a $21,000m EBITDA business in the absence of COVID-19. If it normally pays circa $7,000m in interest and taxes, plus around $5,000m on capital spending, that leaves around $9,000m left over. The recently reduced dividend results in around $3,500m or so in total annual cash outflow. That means a minimum of around $5,500m (there or there about) for annual debt reduction if my math is right.

Obviously it’s tough to say how the company ends this year in terms of its net debt position. However, working with the above numbers implies a fairly long road to reach its leverage target. Of course, it could also get there another way – increasing the denominator. EBITDA growth, however, has not proved easy either.

In any case, none of this really affects the value case too much. I mean, the company currently sports a market-cap of around $97,500m. As per above, FY19 debt came in at around $95,500m net of cash & equivalents. That gives us a ballpark enterprise value of $193,000m right now. What if the company reduced that figure by $30,000m out through FY25? That basically takes up its current post-dividend free cash flow generation, with some free cash flow growth coming from saved interest expense. (Note, this isn’t a prediction, I’m just playing with some numbers).

Anyway, that implies net debt of circa $65,500m by then. Assuming it maintains its current enterprise value, we would be looking at roughly $132,000m for the equity portion. That works out to a stock price of around $66.50 based on 1,990m shares outstanding. Not great, though it would also payout $7.25 per share in dividend cash on top. That takes us up to $73.75 per share mark, or the high single-digit returns area in a low-case scenario.

Here’s the thing – the company trades at an EV/EBITDA of less than ten right now. Obviously that’s based on vaguely normal operating conditions without any COVID-19, but still, that is quite a steep discount to mega-cap peers in the consumer defensive space.

Now, that may be warranted for all kinds of reasons. The company has been harder by the pandemic compared to certain other consumer staples. But this company commanded an EV/EBITDA multiple of 12 near the start of the year. Moreover, we were looking at circa 3.5% EBITDA growth at the mid-point before COVID-19. What if the company grows to a $25,000m EBITDA business by FY25 and commands that kind of valuation multiple? That’s a $115 stock price under the above deleveraging, or $122.25 inclusive of cash dividends. I continue to think it is a very good deal sub-$50.