Beer giant Anheuser-Busch InBev (BUD) released its 3Q19 results on Friday. With the stock down over 10% at the closing bell, the market reaction tells you what you need to know. The short version is that non-existent volume growth and an uptick in costs and income taxes have taken a chunk out of profit. Moreover, the company expects that performance to carry on into the final three months of the year.

I’ll try to sum up the main points as succinctly as possible. First, volume growth (or lack thereof). The most obvious way for Anheuser-Busch to grow its profit is to sell more Budweiser, Stella Artois and Brahma every year. The company sold 143.4m hectoliters in 3Q19, down 0.5% year-on-year on an organic basis. Total volume sold came in at 419.4m hectoliters over the first nine months of FY19. That actually represents a 1% increase in organic terms on this point last year.

North America and Asia Pacific (specifically China) led the way on the volume declines front. In North America, Anheuser-Busch sold 29m hectoliters in the third quarter. That was roughly 975,000 fewer than it managed in 3Q18. As for Asia Pacific, the company sold 27.5m hectoliters in 3Q19 compared to 29.5m in 3Q18. Volumes in China were down 5.9% year-on-year. Given those two regions account for 40% of company volume (and an equally big chunk of profit) that is not great to see.

On the plus side, the company is putting in stronger performances in several key emerging markets. For instance, its Mexican business posted high single-digit volume growth (ahead of the wider beer industry there) in the quarter and mid-single digit volume growth over the first nine months of the year. Throw price increases into the mix – more on that below – and the country is seeing double-digit revenue growth. Colombia and South Africa also saw impressive volume and price growth.

Despite an overall sluggish volume picture the company realized a higher global average price for its products. For instance, the company raised prices by 6% per hectoliter in China. That was enough to offset the volume decline mentioned above.

Globally, revenue per hectoliter clocked in 3% higher in 3Q19 year-on-year. That was enough to see total organic revenue tick up 2.7% after stripping out things like negative foreign currency movements. Revenue per hectoliter growth came in at 3.7% over the first nine months of this year. Additional 1% organic volume growth on top of that brought total organic revenue growth to 4.8% year-on-year.

Unfortunately for Anheuser-Busch its costs shot up versus 3Q18. The net impact? Normalized earnings before interest and taxes (EBIT) came in 2.6% lower (on an organic basis) compared to 3Q18. Coupled with a higher income tax expense, this resulted in underlying profit per share slumping to $0.94. That was down $0.17 on the $1.11 posted last year. For the nine-month period, underlying profit per share stood at $2.76. That was down $0.16 on the $2.92 made at this point last year (again on the back of a higher income tax rate).

As it stands the company is generating annual EBIT in the $17,000m range. Subtracting net interest expenses ($3,500m), income taxes (another $3,500m) and profit attributable to non-controlling interests ($1,300m) results in annual profit of around $9,200m. Dividing that by the 1,980m shares in existence gives us a current annual earnings power of around $4.40 per share. 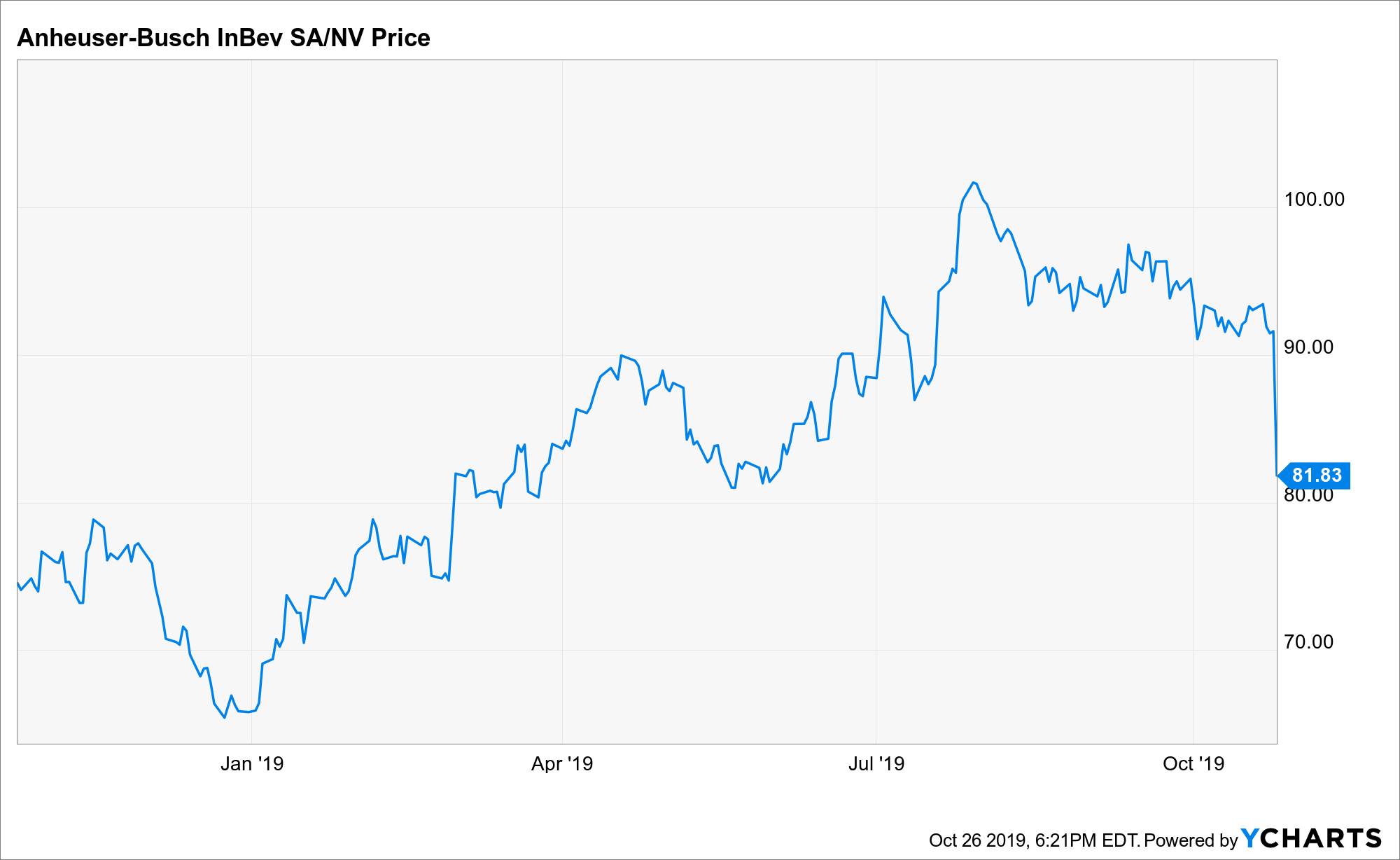 On that basis, it’s easy to see why the shares enjoyed a strong 2019 pre-earnings announcement. Folks could pick up Budweiser stock for just $65.80 per share at the start of January; a figure which pointed to a forward price-to-earnings ratio under of 15. Needless to say, that looks way too cheap for a high quality defensive stock in the current macro environment.

The shares closed at $81.83 on the New York Stock Exchange yesterday, equivalent to around 18.5x annual earnings. Call that an earnings yield of 5.4%. The annual cash distribution – currently at €1.80 per share (~$2.00 per share at current exchange rates) – points to a dividend yield of 2.45%.

I’m inclined to think that represents decent value. Growth-wise, the company is probably in a reasonably good position given its size and industry. A good thing about Anheuser-Busch is that it tilts nicely towards growing markets. According to company and third-party data, the top twenty beer markets in terms of growth will put on incremental volume of 350m hectoliters out to 2027. In three of the largest markets – namely the US, Mexico and Brazil – Anheuser-Busch already commands the number one market share spot.

Furthermore, as consumers in emerging markets get wealthier, the scope for price increases rises too. That produces a decent runway in which to grow volume/price and therefore revenue. (All things being equal the company can then convert that top line growth to bottom line net profit, thus adding real growth to that 2.45% annual dividend).

Finally, the post-dividend cash situation. As it stands, cash dividend payments up around $5,000m a year of company profit. That leaves around $4,000m left over. In order to meet its 2x EBITDA debt target, the company needs to throw the entirety of that figure at debt reduction. I have net debt at around 4x EBITDA right now, so there is still some way to go.

In its own right, debt reduction is worth a small amount of growth to the bottom line through reduced interest expense. That surplus cash can then eventually be used for higher returning endeavors once debt is down to the desired level. Throwing all those points together should give the stock a decent shot at double digit returns from today’s price.