I spent a small portion of last weekend catching up on Warren Buffett’s annual letter to Berkshire Hathaway stockholders. I imagine many readers did the same, though probably not with Alphabet (GOOG) stock in mind. The holding company of Google may seem an odd stock to mention in this context. I mean it famously doesn’t pay a dividend, nor is it one of Berkshire’s holdings at time of writing either.

So, where is this all going? Well, one of the ‘themes’ of Buffett’s letter was the power of retained earnings. Alphabet obviously has that in spades. The business empire, which includes the Google search engine, video site Youtube and network programs like Adsense, pumps out annual net profit in the $35,000m range. As a proportion of revenue we are talking somewhere in the 20% region. It is an absolute cash machine.

So far, Alphabet has chalked up over $150,000m in retained earnings over the course of its existence. Needless to say, that makes it one of the most profitable enterprises in human history. Most of that figure, roughly $120,000m to be a bit more precise, currently sits right on Alphabet’s balance sheet. That is cold hard cash and short-term investments, with total debt clocking in at just $4,500m to boot. On that basis, the net cash & short-term investment pile currently stands at circa $115,000m. 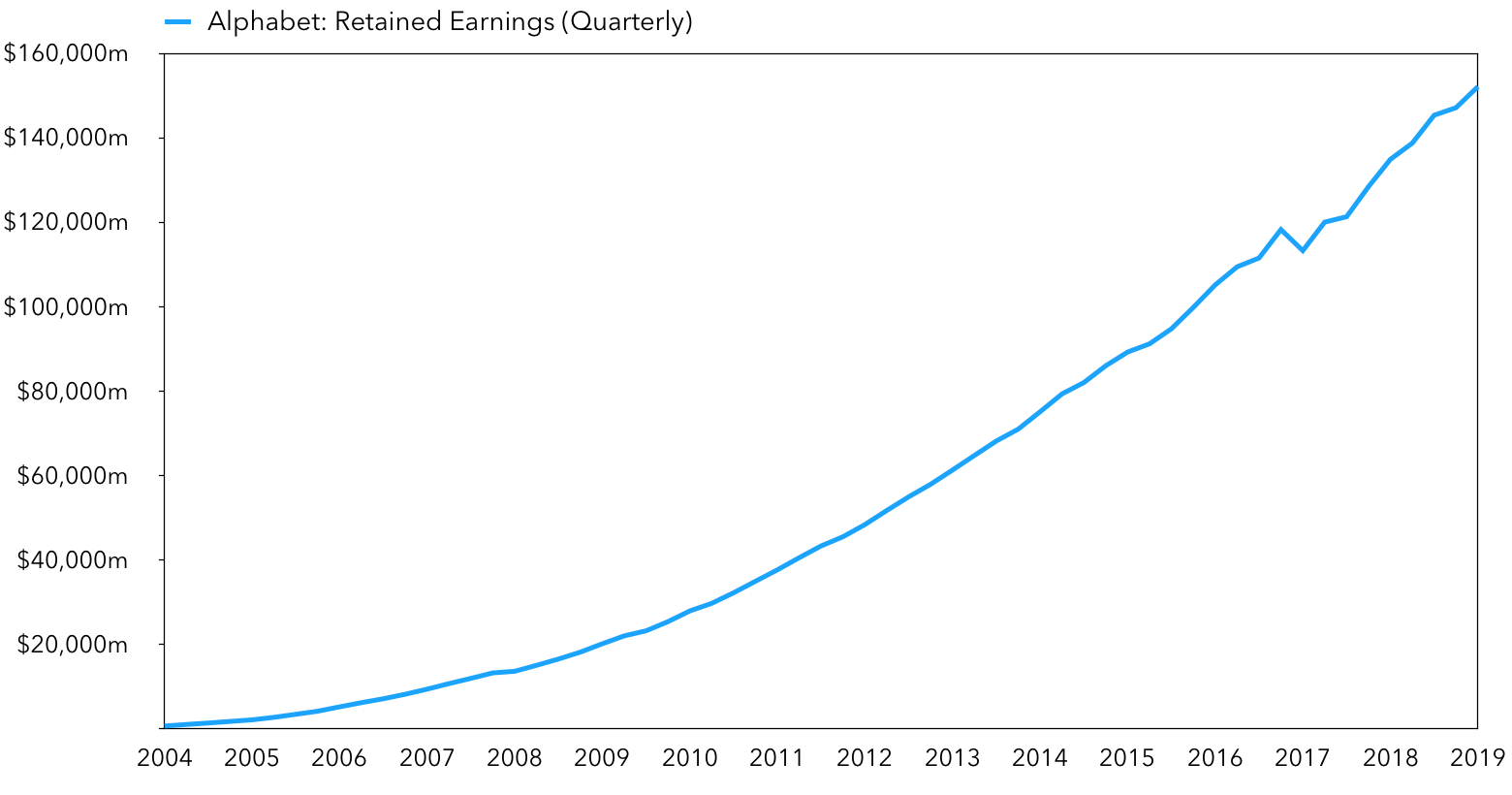 Just think about that for a moment. The median market-cap of the S&P 500 was something like $23,000m last year. Alphabet has nearly 5x times that figure in net cash. Its cash position is so large that it could, in theory at least, buy something like Starbucks or American Express outright.

The last time I covered Alphabet stock was just over one year ago. The shares traded for around $1,125 each back then, with annual earnings of $43.70 per share. Since then, the stock has done quite well. Alphabet’s share price is up around 23% over the past twelve months, and that’s after factoring in the recent coronavirus-induced drop too. So far, so good.

Recent results released last month were also good in my view, though the market disagreed. The company reported total revenue of $161,857m last year, an increase of 18% compared to 2018. Excluding negative foreign exchange movements, revenue growth came in at 20% year-on-year.

A couple of other points are worth mentioning. Youtube, disclosed separately for the first time, reported ad-sales of just over $15,100m in 2019. That was over 35% higher than in 2018. Secondly, total Google advertising revenue (spread across Google search properties, Youtube and Network Members’ properties like the Adsense program) accounted for 83.9% of total company revenue. Finally, per-share profit clocked in at just over $49 per share, up around 12.5% on the $43.70 per share that Alphabet made during 2018.

This time last year I made the case that Alphabet was a typical GARP candidate. I’m not sure all that much has changed. I mean right now you can buy the shares for $1,390 apiece. With 2019 profit at $49.16 per share, the stock trades for around 28x last year’s earnings. 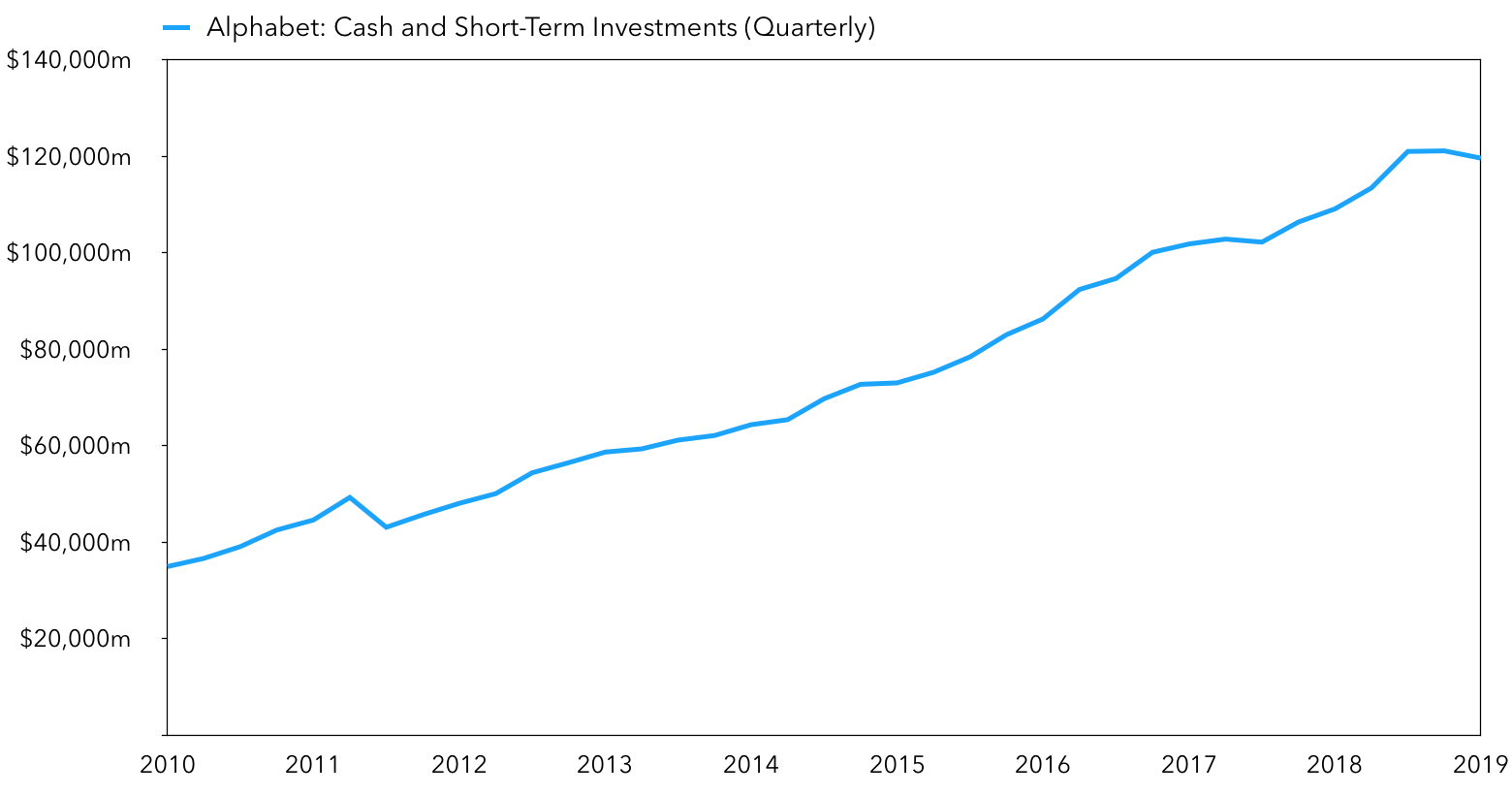 I don’t think that is particularly unreasonable. Bear in mind we still have the ever-growing cash position to take into account. When it reported a couple weeks back the California-based company had a total of 690m shares in existence. If the cash pile currently stands at $115,000m net of debt, then back of the envelope math puts the figure at $165 in per-share terms. Or put another way, when you spend $1,390 buying one share of Alphabet stock, you are actually getting $165 thrown in for good measure. That makes the stock cheaper than it looks on paper.

Now, I have no idea what the long-term plan is for that cash hoard. A lot of folks want to see it returned directly to shareholders by way of dividends and buybacks, just like Apple is doing. But so far management is doing a fine job growing profit at a double-digit rate. Anyway, the cash-adjusted share price is more like $1,225 using the figures set out above. Quick math puts the earnings yield at over 4% on the same basis. That’s a pretty good deal all things considered. Even if underlying growth slowed down to a high single-digit clip, this would compound away quite nicely for long-term stockholders.

The Actual Dividend Millionaires Of America