Google’s parent company Alphabet (GOOG) released its 2018 results amid the flurry of news over the past few weeks. Overall the figures looked good to me, even though the market’s reaction was more ambivalent. I’ll start with the major plus point: growth is strong, and I think you can make a good case that it is trading at a reasonable price (GARP). 4Q18 revenue increased 22% year-on-year (23% in constant currency terms, and per-share earnings clocked in at $12.77. That was some 17% higher than Wall Street predictions.

As for the market’s mixed response, it seems to be mostly down to the cash flow situation. I mean Alphabet is spending a heck of a lot on capital expenditure these days. Of the circa $13,000m it generated in the last three months of 2018, 55% (around $7,000m) went on purchases of property and equipment. The comparable ratio in 4Q17 was around 42%, and it is a trend that has got some folks spooked. The fact that the company’s operating margin dropped from 24% to 21% over the same period didn’t help either.

As far as I can see that is pretty much the extent of the bad news. Good news, however, is still plentiful in my view. Firstly, we have the growth situation which I mentioned above. Five years ago Alphabet earned around $18 per share in net profit. Last year the company reported net profit of $43.70 per share. Analysts expect that to hit over $55 per share by the end of fiscal 2020, rising to nearly $75 per share by the end of fiscal 2022. Or put another way, the earnings juggernaut is expected to chug along quite nicely at a double-digit annual clip. 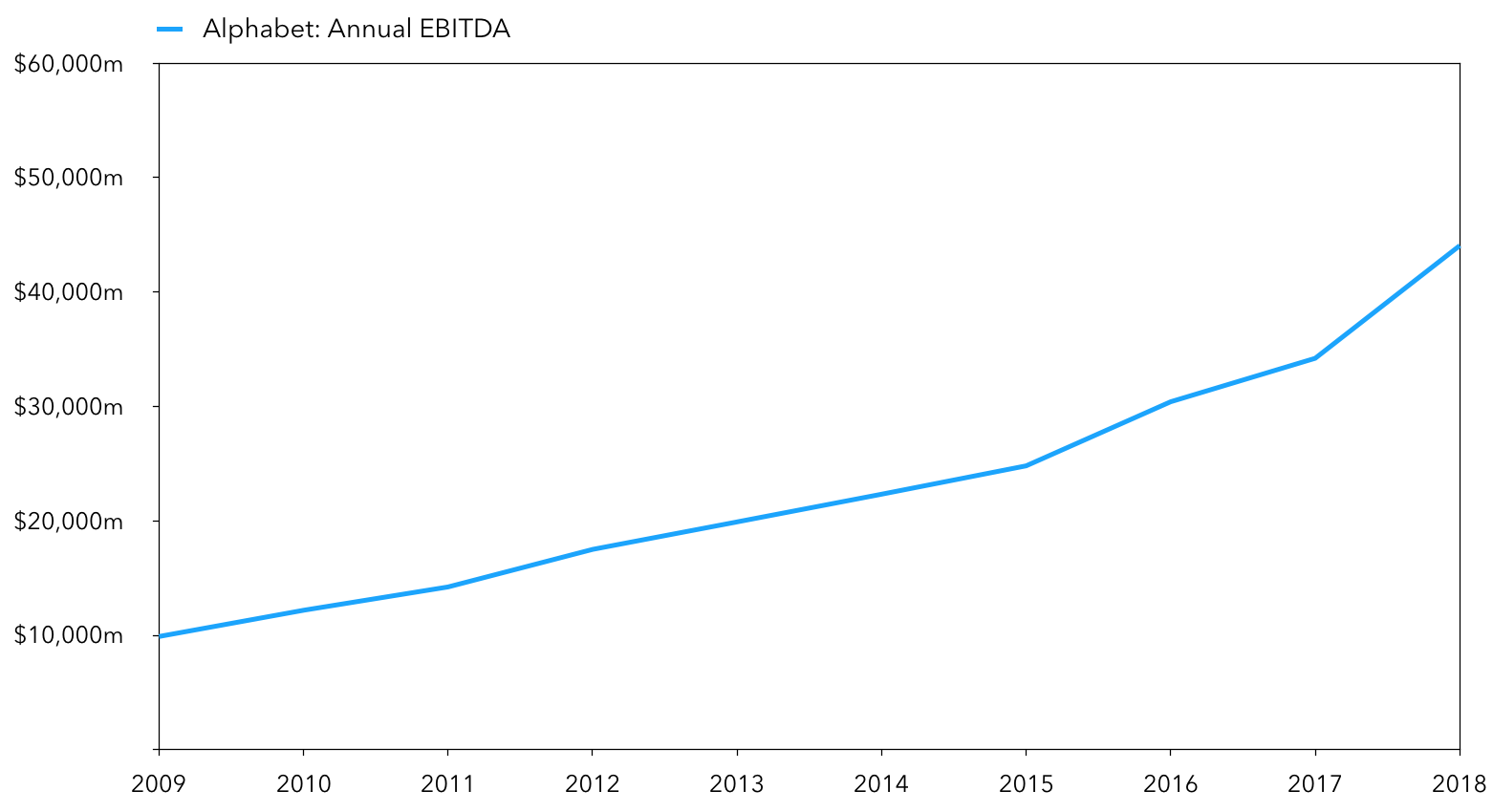 Secondly, the valuation seems very reasonable. I mean, at Friday’s close you could pick up Alphabet shares for around $1,115 each. That points to a valuation of around 25x prior year earnings. For a solid growth company that sounds pretty reasonable, but given Alphabet doesn’t pay a dividend or engage in meaningful share repurchases you might think it a tad underwhelming.

This leads us nicely to the third point: the fortress balance sheet. Alphabet had roughly $16,500m in cash & cash equivalents and $92,500m billion in short-term investments at the end of 2018. On the other side of the equation was just $4,000m worth of total debt.

It kind of goes without saying but that is an absolutely gargantuan position. On a per-share basis it means that Alphabet has around $160 in the form of cash and income bearing investments. There are two other points to bear in mind here Firstly, Alphabet’s industry is obviously somewhat volatile in terms of both of regulation/legislation and business disruption. Having a circa $120,000m war chest ready to face those sorts of challenges is a good thing in itself. 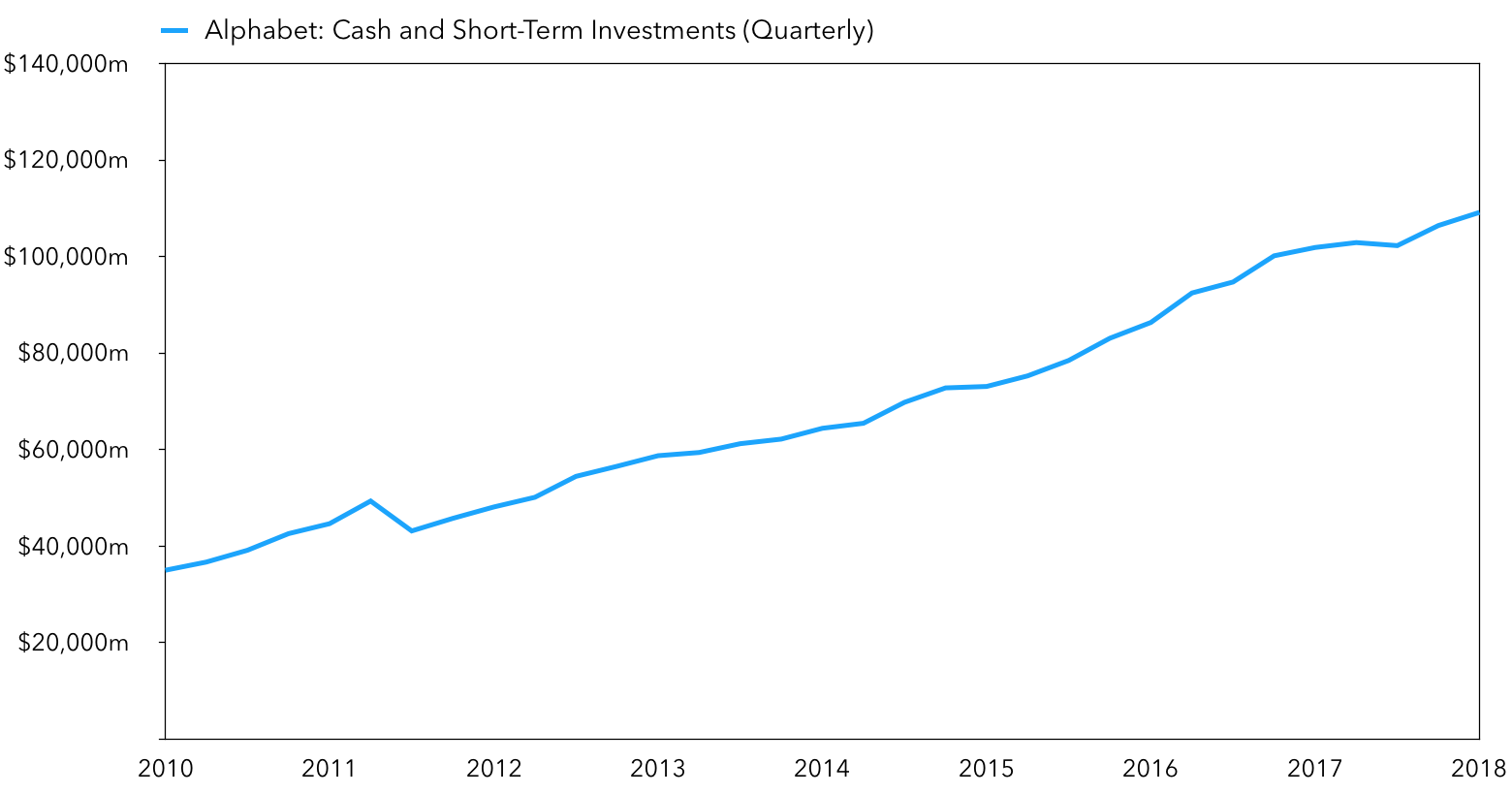 Secondly, it makes the valuation look quite a bit more expensive than it really is. Take the net cash balance away from the stock price leaves a “debt adjusted” P/E ratio under 20x last year’s earnings. Needless to say, that is rather more attractive than the 25x multiple I quoted earlier. Overall I’d say it makes Alphabet a solid GARP stock given its realistic shot of posting double-digit average annual earnings growth over the next several years.

Kraft Heinz: Blood In The Streets